Though you would not think it looking out of the window this last week, we have had a proper summer this year. Whole weeks of long hot days with no rain clouds to be seen. It has resulted in early ripening fruit. I don't think I have ever made blackcurrant wine in July before. And the majority of currants were picked on 2nd July in Lindsay's garden. She was having a clear out and needed someone to store the WYSO percussion - a snare drum, triangle and tambourine. In return for this duty I was paid in blackcurrants - about 4 lbs - though I provided some of the labour in picking. 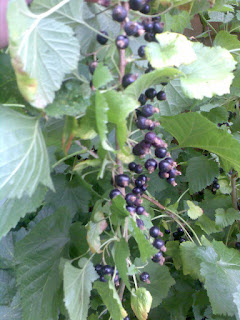 Lindsay's blackcurrants were stored in our freezer whilst the blackcurrants on our bushes ripened, which they did in stages. Every few days I would go out and collect another 4 oz, until my grand total (on Thursday 20th July) was 6 lbs - enough for a double batch. 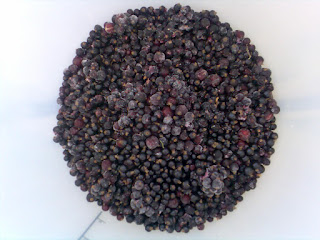 I put the blackcurrants in my bucket and enlisted Adam, who happened to be staying, in the mashing duties. He is (much) younger and (much) fitter than I am and is planning on an army career. Meanwhile, I measured out 5 lbs 8 oz of sugar and poured this into a pan holding 12 pints of water. It took an age to dissolve this and then a further age to boil it, before I poured it over the (expertly mashed) blackcurrants.

Next morning, when adding the yeast and a teaspoon each of nutrient and pectolase, I realised that I had missed a box of blackcurrants. My wine is 12 oz short of fruit - that is an ounce a bottle, and describing it in those terms it doesn't sound too bad. I'm still cross about it, though, and I hope it makes little difference to the wine.

On Wednesday 26th July I put the liquid into its two demijohns, straining out the fruit first with a colander and then a sieve. It turns out that I could have used more water - about half a pint. The wine is its usual attractive light aubergine colour and is in my bathroom bubbling away quietly to itself. 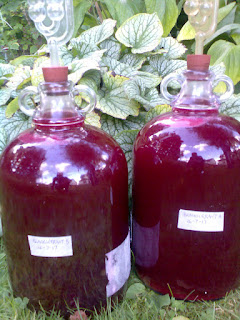 If you want to see how I this wine turned out, click here.
Posted by Ben Hardy at 22:01