Everyone has been complaining about how dreadful this year has been for fruit from trees. Apparently you can't get a plum for love nor money and Julia tells me her apple crop is pathetic. However, the crab apple tree in our back garden is as bountiful as ever. Small red apples are dripping off its branches in pleasing clusters. Picking twelve pounds for a triple batch of crab apple wine took little time, even though I tried to be selective in my fruit selection - making a real effort to go for the shiniest, reddest ones. Some of these, of course, had been invaded by grubs and I thought it best to leave those. On the whole insect larvae in wine is not the greatest of flavours.

I picked the apples on Saturday afternoon, 6th October and did the first proper stage of the wine on Sunday 7th October. This involved washing the apples - more accurately leaving them in a basin of water until I needed them - and then whizzing them through the 'slice' attachment on the food processor. I put them in the bucket and added 8 lbs 10 oz sugar - it was meant to be 9 lbs but I ran out - and 3 lbs of minced sultanas. Again I used the food processor for mincing. It is one of the more useful kitchen gadgets. I poured over 21 pints of boiling water and left it over night, adding the yeast and two teaspoons each of nutrient, pectolase and citric acid the next morning. 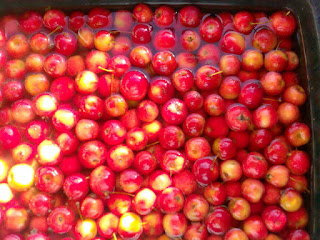 The bucket is one of the many items in the kitchen causing obstruction. Another is our fridge-freezer. This has been replaced by a shiny new larger one. Except the new one doesn't work and is actually an electric cupboard. I think it gets replaced tomorrow. 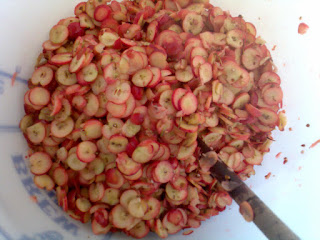 It didn't. Eight days on from having the new fridge delivered, we still have two fridge shaped objects in our kitchen. One day I will look back on this and laugh.

On Saturday 13th October I put the liquid into its three demijohns. My first task was removing the apple bits floating at the top. I did this by dredging the surface with a plastic collander. It was an effective method and cut down the time I usually spend at this point in making crab apple wine. Once the apple numbers were manageable I employed the usual technique of dipping and filling my plastic jug and pouring the contents through a nylon sieve and funnel into the demijohn.

I probably could have used another pint of water in the initial stages. However, the wine is currently a pleasing pink and fermenting aggressively. 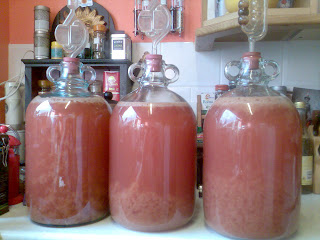