I see that the first bottle of this batch was given away to promote The Book. We have come full circle. This bottle was drunk at York Victorian Cemetery as part of a 'Local Authors' Festival', where I was one of the guest speakers. It was an entertaining affair, with two crime writers, a Gervaise Finn-alike and a couple of memoirists - one of whom was extremely intellectual. More importantly, there was stacks of cake.

I enjoyed my slot, though I spoke for less time than anyone - about 20 minutes. Expecting to be nervous, I opened the bottle half an hour before hand and had a couple of slugs of Dutch Courage. It was not a precaution that I needed - I was not nervous and (what a surprise) enjoyed being centre of attention. I shared the bottle outside the chapel and everyone who tried it made appreciative noises. 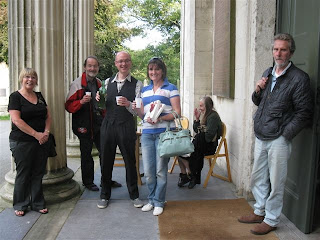