I have been worrying about this wine for the last few weeks. Most years I pick my blackberries on the August bank holiday weekend. This year, however, my parents were away in Shropshire then and the blackberries around Leeds had yet to ripen. The following two weekends were entirely taken up with the Northern Wagner Orchestra, which meant I had to do my foraging on 16th September. It has been over a decade since I left blackberry wine this late and I kept on hearing dire reports about the brambles being thin on the ground and over-picked at the cemetery. 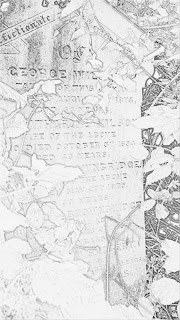 I went to York Victorian Cemetery on Sunday morning with Claire, Rachel and Duncan, fearing the worst. It was quickly apparent that - as is usual - my worries were foundless. There were large blackberries hanging over the main path from the chapel within easy reach. Claire says that she can't remember a year where I have not worried. Rachel suggested that we stay together but then immediately wandered off.

Picking was a little slower than in past years, and I did rather more clambering on top of gravestones and stretching to pick those tantalising perfect specimens I usually ignore for something within easier reach. My best graves were Frances Craven, Jeremiah Riley, Dora Wil- (there was too much ivy on her gravestone to determine her name properly) and John & Bessie Carr. Claire made a note of Mary Somerset and William W Wilberforce. She thinks she picked from Thomas Douthwaite, but he was hidden by vegetation this year. 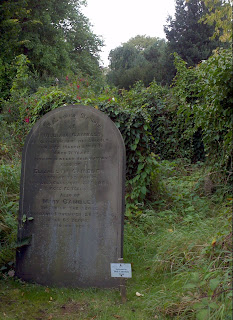 Between the four of us we picked 15 pounds of blackberries. Claire won with 4 lbs 13 oz. I came second with 3 lbs 15 oz and Duncan and Rachel got the rest shared equally between them. Though I should really have 16 lbs for a quadruple batch, I have decided to make 24 bottles anyway.
I did not wash the fruit, partly through laziness and partly because it was too ripe. I crushed it in the bucket, added 10 lbs of sugar and 20 pints of boiling water. The yeast and two teaspoons each of nutrient and pectolase went in on Monday morning, and then I left it virtually untouched for a week as we went to Lincolnshire and then Newcastle and saw many splendid things.
Sieving out the blackberries on Sunday afternoon, 23rd September, took over an hour but I entertained myself with Radio 4 comedy. None of the four demijohns are full, so I could have added probably another two pints of water.

If you want to see how this wine turned out, click here
Posted by Ben Hardy at 20:41