Having left it nearly too late to forage for blackberries, I did not intend to make the same error with elderberries. Some years I have left this wine to the end of September. That would not have worked this year. On Saturday 8th September I walked to the open space off Gledhow Valley Road to find that the Council had wreaked havoc on the copse of elder trees. There had been some recent and enthusiastic pruning and no fruit to be obtained. I wandered back, picking elderberries from such trees that I could find, resulting in a respectable 1½ lbs.

Next morning I drove to my usual spot at Kennel Lane and walked to the field that I always use. There was fruit in abundance hanging from trees and I did not feel like I was thieving from the birds in taking two carrier bags' worth. The nettles were neither as high nor as fearsome as the previous year and I was only stung the once. 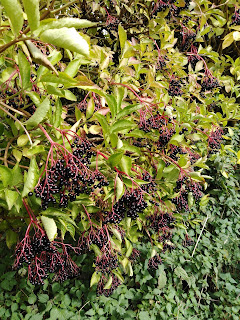 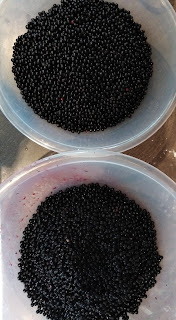 Much of the rest of Sunday was spent stripping the berries from their stalks, a task enlivened by listening to Radio 4 Comedy on the BBC i-player radio app (which wins the 'Best App on My Phone' Award by a streak). I had a quick jaunt out to look at the eighteenth century bathing lodge in Gledhow Woods, it being open for World Heritage Open Day, but otherwise spent the day on elderberry wine. My total elderberry haul proved to be a little over the 6 lbs needed for a double batch so I have frozen the remainder. 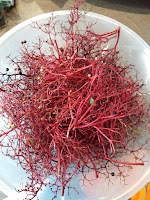 I put the fruit in the bucket and crushed it with a potato masher. I put in 5 lbs 4 oz of sugar and 12 pints of boiling water (exactly the right amount, it proved) and left the mixture overnight to cool. On Monday morning I added a teaspoon each of yeast, nutrient and pectolase, stirred it around and then ignored it (save for the occasional stir) until Saturday 15th September. 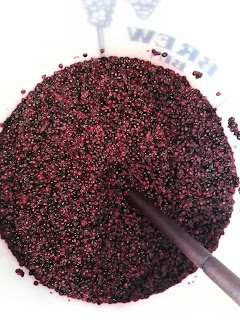 Getting this into its two demijohns was quicker than blackberry - there was less sludge to bung up the sieve. The wine is the darkest that I make and is currently stored in the bath in case the fermentation is too eager. For the moment, it appears to be behaving itself. 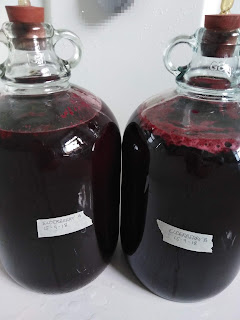