Blackcurrant Wine - The Making Of ... 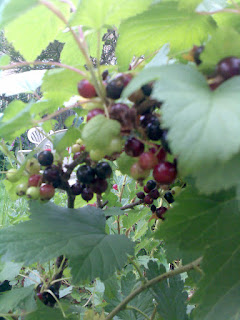 Blackcurrant wine is one of my very best. It has a sharp, tangy taste which is unmistakeable. Blackcurrants, however, are not consistently available in sufficient quantities for me to make it every year. Therefore, I was delighted when Julia rang this morning, 22 July, to let me know she had three pounds going spare. The timing could not have been better; today is a Sunday where I have little else planned and by starting the wine today it will be in its demijohn by the time I go to Rydal Hall.

Claire and I went over to Julia's bearing gifts of a jar of strawberry jam and one egg. In return we were given a bag full of gooseberries, the blackcurrants and recipes for gooseberry chutney and gooseberry ketchup. We returned home via Sainsbury's, where we collected vast amounts of vinegar, sugar and rum - the last being for a rumtopf which Claire shall begin today. 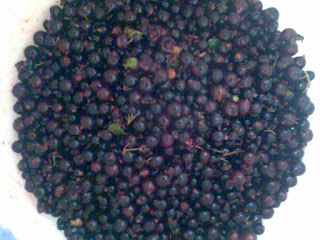 Immediately after lunch of salad and pitta bread I started the wine, a process which took little time. I boiled 3 lbs of sugar in 6 pints of water. Whilst this was on the hob I poured the currants into the bucket and mashed them. I did not bother washing the fruit; it was already sticky and I did not want to lose any of the juice. The boiling water will kill anything nasty and a little dirt is good for the immune system. I poured the water-sugar mix over the mashed blackcurrants and gave it all a stir. 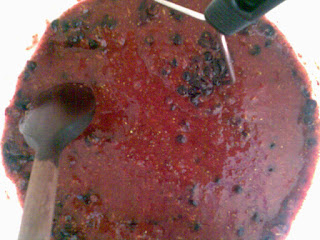 When we returned from a feast at Richard and Linda's I added one teaspoon of pectolase, and then the yeast (Burgundy) and a teaspoon of nutrient on Monday morning.

I had planned to put this in its demijohn on Friday night and then bottle my Prune & Parsnip as a pre-Rydal treat. What I had not planned to do was to be still in the office at 10 p.m. finishing off a set of 14 certificates of title that landed on my desk the day before a two week holiday. Scuppered! So, I sieved out the fruit and put the liquid into the demijohn of Saturday morning, 28th July, at 7 a.m., while listening to reports about the Olympic Opening Ceremony on Radio 4. 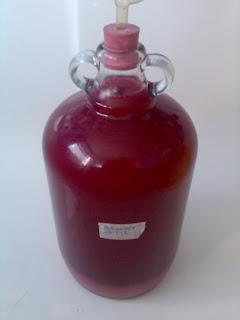 If you want to see how this wine turned out, at the drinking stage, click here.

If you want to see a video on YouTube of how someone else - Alex Dav - has made blackcurrant wine, using quite a different method - click here. It lasts about 5 minutes and has some intriguing ideas.And his follow up is here, and again it is worth watching
Posted by Ben Hardy at 10:11