I popped into Sainsburys on Thursday to pick up one or two things we needed and saw that 'Basics Parsnips' were being sold at 70p for a 750g bag. In this instance 'Basics' means 'Not Aesthetically Pleasing', and for wine that matters not a jot. I put three bags into my trolley and proceeded to the checkout.

My wine-making, though, was done on Sunday 5 February. The morning's activities mostly involved digging in the garden. It was sunny and - once I had been digging for half an hour - T-shirt weather (until I stopped). Two robins watched my work with interest and one was brave enought to flit to a point I had just dug, grab a worm and flit off again. They are more corageous than the pigeons and blackbirds, who stayed in their trees until I went inside.


Once I decided that I had done enough in the garden for the day I weighed 4 lbs of parsnips and chopped these into small pieces, ready for boiling. These sat around for a couple of hours while we attended Leeds Grand Mosque (which is more 'Concrete' than 'Grand') for an open day. Mostly we were there for solidarity purposes, to express support against the vilification of Islam in social media and by certain influential sectors and people, but I got a cup of tea and a Danish pastry too.

Back at home, I halved each of the prunes and put them in the bucket. The parsnip pieces were boiled in 16 pints of water for half an hour (though I did this in two lots). I poured the water into the bucket and threw out the parsnips. 5 lbs 10 oz sugar went in and the next morning I added the yeast and a teaspoon each of pectolase and nutrient. It took a coupld of days before there was much evidence of fermentation, and I put that down to it being February and cold.


I was going to put this into its demijohns on Friday night, but Stan was knocked over and killed that evening, so wine-making was rather less important. I know he was only a cat. But he was our cat and I loved him. Instead, the wine went into the demijohns on Saturday morning, 11th February, and judging by the foam, I am worried that I have filled them too full. They look like two large jars of an English Real Ale. 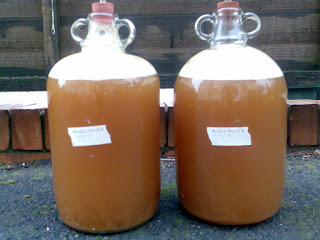 If you want to see how this wine turned out, click here.
Posted by Ben Hardy at 15:31