Muscat of Alexandria - The Making Of...

When I was in America last year, I received a Facebook message from Nick's brother-in-law, who I had met in May. Would I be interested in sharing his bumper harvest of grapes? I replied that I would be more than interested. Could I collect them in 48 hours? Being in San Francisco, about to travel to Nebraska, presented a problem. I suggested that he give a bag or two to Nick, who could store them in his freezer until my return. This was somewhat presumptuous, but no-one raised any complaints, so that is what was done. And there the grapes remained. Every now and again I would say "I must collect those grapes" but nothing was organised until last week. 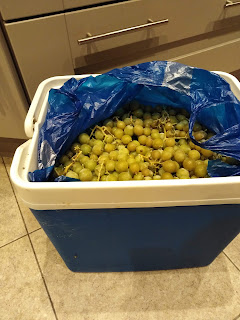 On Tuesday, 8th January, Nick took the grapes into work and I collected Claire and them that evening. I had not realised quite how many there would be. It was an entirely full freezer-box. Claire and I spent that evening stripping frozen grapes from their stalks. It was finger-numbing work and in total there were 20 lbs and 10 oz. These went into my large bucket and I left them 24 hours to defrost.

On Wednesday I took a potato masher to the grapes and spent about 20 minutes crushing them. The bucket was too narrow and my feet are too disgusting to do it in the traditional manner. It is clear why wine is made from grapes - they produce so much liquid and do not require any water.

For the first time in many years I regretted not having a hydrometer as I did not know if any sugar would be required. All I could do was take a sip and guess. I added a pound. Having consulted my wine making books, I though it wise to add 2 crushed Camden tablets to stop any natural yeast fermenting,

The next evening - so 10th January - I added a teaspoon each of yeast, nutrient and pectolase. I left the wine until 16th January before removing the grape skins and putting the wine into its demijohns. That huge number of grapes resulted in only a demijohn and a quarter, which is less than I would have guessed. I will give away 4 bottles of this: one to Nick and three to Rick. I will not, however, make any promises about its taste. 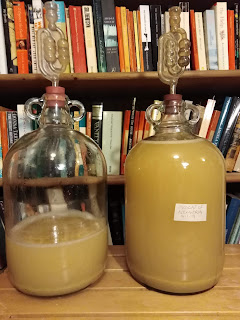 If you want to see how this wine turned out, click here.
Posted by Ben Hardy at 16:57