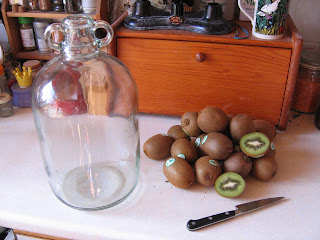 Spring may finally have sprung, though it has taken until 6th April to do so. The sky is blue, there is virtually no snow remaining and our rhubarb plants are raising their first exploratory tendrils. I should really be outside digging, but I need to get April's wine started today.

I went into our usual fruit and veg shop fully intending to come out with three tins of exotic fruit, but my eye was caught by the kiwi fruit, being sold at five for a pound. This is a whole kiwi fruit per pound cheaper than normal and I do love a bargain. Also, joy of joys, I get to tick off the letter K from my alphabet of wine. So all portents for this flavour are hopeful. (Though Claire thinks it will  be bland.) 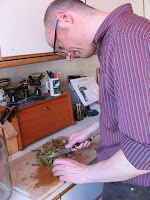 I do not have a recipe for kiwi fruit wine, so I decided that twenty kiwi fruit would probably be about right - which is four pounds in weight (and, coincidentally, price). I have not googled the recipe in case I find out I need double that. I peeled them, though did not worry overly about leaving some skin on. This was tedious and sticky, and it is easier to peel them whole rather than in halves.

I chopped each fruit into eight and put them all in the bucket. They got a good mash and I added three pounds of sugar. I boiled seven pints of water and poured this over. The process made me irritable - which I worked out was because I got too hot and Stan, who does not like any food I currently serve (except creme caramel), whined incessantly. I locked him in the front room with some Sainsbury's Own Brand. 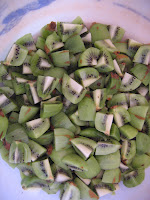 On my return from the theatre - Rutherford & Son, performed by Northern Broadsides (shouty, intense, good) - the wine's temperature had dropped to 29 degrees, so I added the yeast and a teaspoon each of nutrient, pectolase and tannin.

I strained the liquid into its demijohn on Wednesday evening, 10th April. I was close with my estimate of water required - there is probably about half a pint too much. As was entirely predictable, the wine has turned from green to its usual cloudy-piss yellow. 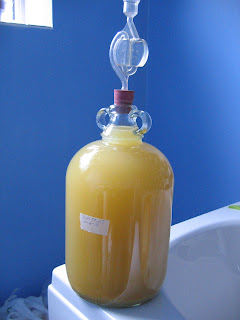 If you want to see how this wine has turned out, click here
Posted by Ben Hardy at 19:39